The Awesome Scuba Stevie Harte of Latchi Watersports Centre saved the day today when he rescued a 70 year old Giant Turtle who was caught in a fishing net off St. Georges Island from certain death…

St. George’s Island (a very short distance from Latchi) is a very popular dive site. St. George’s is just off the Akamas Peninsula, which is a designated nature reserve. Akamas (Greek: Ακάμας, Turkish: Akama), is a promontory and cape at the northwest extremity of Cyprus with an area of 230 square kilometres.[1] Ptolemy described it as a thickly wooded headland, divided into two by summits [a mountain range] rising towards the north.[2] The peninsula is named after a son of Theseus, hero of the Trojan War and founder of the city-kingdom of Soli. 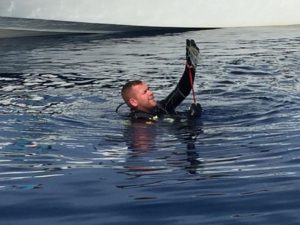 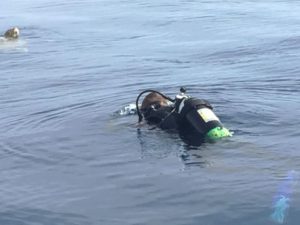 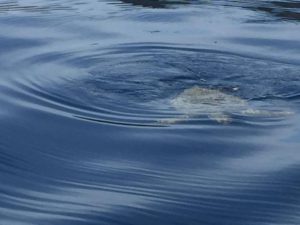 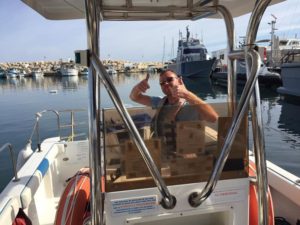 Visitor attractions in Akamas include a loggerhead turtle. Sanctuary and the Baths of Aphrodite where the goddess is said to have bathed. As the area is therefore relatively inaccessible, there is a large diversity of flora and fauna there. Indeed, the European Environment Agency noted that it was one of only 22 areas of endemism in Europe. Akamas supports a wide diversity of life including many vulnerable species, some of which are endemic to Akamas. Wild flowers include cyclamen, turban buttercups, alyssum (Alyssum akamasicum, endemic to Akamas). Cyprus tulip, and many species of orchid, yellow gorse and white rock rose.

Thirty-Nine of the 128 endemic plant species of Cyprus are found in the Akamas peninsula. And, animals found in Akamas include fruit bats, shrews, hedgehogs, foxes, snakes, lizards, griffon vultures, Cyprus warblers, and Cyprus scops owls. Vulnerable species include bats, magreonk seals[clarification needed]and sea turtles. There is a turtle hatchery at Lara Bay , where the eggs are protected.